DWD 007: What The Magi Can Still Teach Us About Worship

The story of the Magi in Matthew 2 is the traditional text for the first Sunday in Epiphany. Letâ€™s review it, and notice all the moments of divine revelation, â€œepiphanyâ€ occur. I have a special “mash up” translation.

Wise Men Visit the King CSB / Voice (The Message ,Amplified)
2 After Jesus was born in Bethlehem of Judea in the days of King Herod, Magi from the east arrived in Jerusalem, [other translations -scholars, seers, or wise men, these were educated men who specialized in astronomy, astrology, and the natural sciences] 2 saying, â€œWhere is he who has been born king of the Jews?
When we were far away in the East we saw His star, and we have followed its glisten and gleam all this way to worship Him. (Voice)

3 When King Herod heard this, he was deeply disturbed [terrified, worried] and all Jerusalem with him [the whole city was about to have a panic attack].

4 So Herod called all of the leading Jewish teachers, religious scholars, the chief priests and head scribes, and he asked them where Hebrew tradition claimed the long-awaited Anointed One would be born. (Voice) [This was think tank – a panel of experts]

5 â€œIn Bethlehem of Judea,â€ they told him, â€œbecause this is what was written by the prophet: [And then they quote Michael 5:2, itâ€™s Bethlehem]

7 Then Herod secretly summoned the wise men and [Pretending to be as devout as they were (Message)] he asked them the exact time the star appeared. 8 He sent them to Bethlehem and said, â€œGo and search carefully for the child. When you find him, report back to me so that I too can go and worship him.â€ [Yea right]

9 After hearing the king, they went on their way. And there it wasâ€”the star they had seen at its rising. [a miracle that, of course, overjoyed and enraptured the wise men. (Voice)]
It led them until it came and stopped above the place where the child was.

10 When they saw the star, they were overwhelmed with joy. 11 Entering the house, they saw the child with Mary his mother, and falling to their knees, they worshiped him. Then they opened their treasures and presented him with gifts: gold, frankincense, and myrrh. 12 And being warned in a dream not to go back to Herod, they returned to their own country by another route.
â€”â€”

The word of God for the people of God!

What the Magi can teach us about worship.

1. The Magi were attentive, sensitive and responsive.

They were attentive to see God at work, sensitive to hear His voice and listen for interpretation, responsive to know what to do and take action.

Throughout this story, they experienced a series of â€œepiphaniesâ€ or revelations that led them to Jesus. Hereâ€™s just a few.

First, they may have known some of the scripture Hebrew prophecies, especially Daniel. They may have done the math of Daniel 2:2 and knew to be alert for

God is speaking all the time. Universal or general revelation.

Third, they actually encountered Him in the presence of Jesus person – and when they did it changed everything.

Fourth, the Lord spoke to them in a dream of warning,

Like the Magi, we can do the same, we can be attentive, sensitive and responsive.

If you seek Him you will find Him.

2) The Magi were on a quest to worship. They were on a mission to find the â€œKing of the Jewsâ€ – that is, the promised Messiah. They understood they were looking for the One who was to be the Savior of the world. They were very spiritual – and sought to find and worship Him. And that is exactly what they did.

Like the Magi, if you are on a quest to seek and find real the true God, you will find Him.

Proverbs 3:5-6 says
5 Trust in the Lord with all your heart
and lean not on your own understanding;
6 in all your ways acknowledge him,
and he will direct your paths.

Like the Magi, if you set your heart to worship Him, you will achieve the desire of your heart.

3) The Magi gave their very best.Â The most valuable gifts they could offer.

A. Gold is still the most precious and valuable resource. You know the golden rule right, â€œHe who has the gold rulesâ€.

B. Frankincense is an incense. Incense is part of the worship of the temple. You can offer a fragrant incense of your praise, prayers and adoration.

How ? Ephesians 5:1-2 says
1Be imitators of God, therefore, as beloved children, 2and walk in love, just as Christ loved us and gave Himself up for us as a fragrant sacrificial offering to God.

C. Myrrh – is a rare ointment used for embalming. It represents sacrifice.

How? We offer a sacrifice of praise, and our lives as living sacrifice.

Hebrews 13:15 New Living Translation
Therefore, let us offer through Jesus a continual sacrifice of praise to God, proclaiming our allegiance to his name.
Romans 12:1 – offer your bodies as a living sacrifice, holy and acceptable to God

Letâ€™s pray.
Father, like the Magi, help us be attentive, sensitive and responsive to the revelation who give. Help to pursue hard after God and be on a quest to worship You. And may we give you our very best. In Jesus name, Amen! 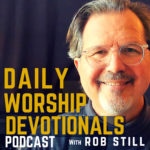 hip DevotionalsÂ is a 5-minute podcast dedicated to studying the Word of God and hearing the voice of the Holy Spirit. Currently, we are following the Christian year calendar as our framework. Weâ€™re in the season of Epiphany â€“ theÂ Season of LightÂ and exploring the early life of Christ. Join us on the journey!