How To Invest In The Destiny of Others: Mentoring, Coaching 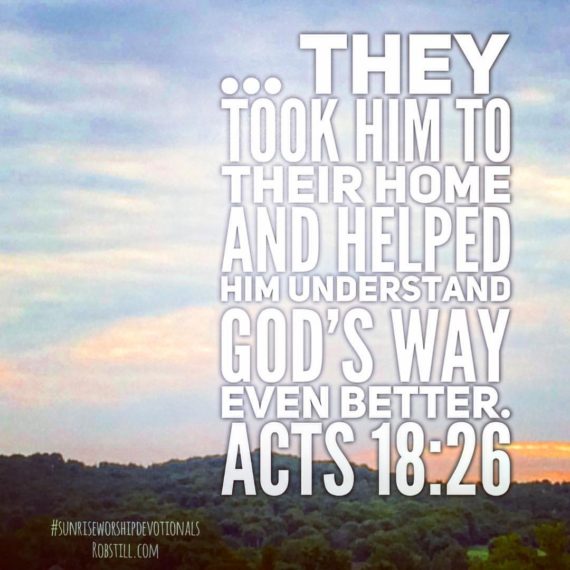 Followers of Jesus, and especially leaders, are called to invest in the destiny of others. One way we do that is through intentional coaching and mentoring.

The story of Apollos in Acts 18 is a great example of how mentors can help you up-level your game.Â

A man named Apollos came to Ephesus. He was a Jew, born in Alexandria, Egypt, and a terrific speaker, eloquent and powerful in his preaching of the Scriptures. He was well-educated in the way of the Master and fiery in his enthusiasm. Apollos was accurate in everything he taught about Jesus up to a point, but he only went as far as the baptism of John. He preached with power in the meeting place. When Priscilla and Aquila heard him, they took him aside [into their home] and told him the rest of the story [explained more accurately the full story of the life of Christ.]

The Message Translation mashed up with a few others from biblegateway.comÂ [Acts 18:24-28]

Ok, so Apollos has the call of God on his life.

This guy was talented and very skillful – â€œa terrific speaker, eloquent and powerfulâ€.

He was also knowledgable – â€œwell-educatedâ€ and on fire – “fiery in his enthusiasm.”

And impressively, he had an anointing – â€œHe preached with powerâ€.

But there was a potential for even greater things from Apollos. He had significant gaps in his understanding.

When knowledgable mentors encountered Apollos, they recognized the both his potential and, importantly – Â what was missing.

They offered to help him and coach him up.

They invested in Apollos in four ways:

1) They took him under their wing.

And shared what they knew of the gospel of Jesus Christ.

â€œThey told him the rest of the story explaining more accurately the full story of the life of Christ.â€

Priscilla and Aquilla were proactive in reaching out to Apollos. They didnâ€™t keep their understanding and insights to themselves, they tried to help Apollos get to the next level of his destiny in God by filling the gaps in his understanding.

Application: You donâ€™t have to know everything, but do share what you have learned in your journey. â€œSneeze Jesus!â€

2) They welcomed him into their sphere of influence.

And â€œreceived him into their circle of friendsâ€.

This is a powerful level of acceptance. They imparted not only new information, but also empowered him with new relationships

Application: Share your friends with your friends. Include new people in your world. For example, if given the opportunity, I’ll include friends from different worship contexts to play on my team.

3) They encouraged him to take a risk.

And put himself out there in a new field.

â€œApollos had been thinking about going to Greece, and the believers encouraged him in this.â€ Acts 18:27a

Application: Speak life! Our words are so powerful.

The encouragement Apollos received gave him courage to go hard after God.

What if their response to his â€œdreamâ€ had been tepid or negative? It might have scuttled the whole project.

4) They used their relational resources to open doors of favor for him.

â€œThey wrote to their fellow-believers there so they would open their homes to him.â€Â Acts 18:27b

Application: Put your own skin in the game to help those you believe in. Donâ€™t horde your connections to yourself. Connect them with one another.

Result: A Powerful Impact and Return on Investment

The pay off was awesome!

And upon his arrival in Greece, he was greatly used of God to strengthen the church, for he powerfully refuted all the Jewish arguments in public debate, showing by the Scriptures that Jesus is indeed the Messiah. Â Acts 18:28

â€œOnce he arrived, he was of great helpâ€¦â€

God gave a tremendous return on their investment by spreading the gospel, expanding and building the kingdom of God in new areas, and thus fulfilling the great commission.

Apollos had a gift, especially in apologetics.

â€œHe would vigorously defeat Jewish arguments in public debate, using the scriptures to prove that Jesus was the Christ.â€ Acts 18:28

Because of the mentoring, encouragement and investment Apollos received, he was able to make a significant contribution to the body of Christ and the work of God in his generation.

How Is God Calling You?

Not everyone has the talent, skill and anointing of an Apollos.

Not everyone has the experience to be a Priscilla and Aquilla.

But some can, and some do.

I bet youâ€™re one of them.

If you know you have gaps in an area that is important to you, then seek out those who can coach and mentor you up to the next level.

If you can help fill the gaps for someone in some area of knowledge or expertise, then reach out to those who need what you have and offer to coach them up.

Be who you are and share what you know.

Then see how God will do far more than you could hope or imagine.

If you needÂ support, advice, and encouragement in worship ministry, maybe I can help. You can learn more about my approach and schedule a free consultation on my coaching/mentoring/consulting page.Â