After his baptism, which must have been a wonderful moment for Jesus, he facedÂ his first test of character. And it was titanic. Read Luke 4:1-13

“Jesus, full of the Holy Spirit, left the Jordan and was led by the Spirit into the wilderness, where for forty days he was temptedÂ by the devil. He ate nothing during those days, and at the end of them he was hungry.”Â Luke 4:1-2

I’ve been on extended fasts before, though they oftenÂ degraded into “mostly” fasts. Forty days without any food … now that’s really, really tough. When I’ve fasted “successfully”, I experienced moments of amazing clarity and breakthrough, but a lotÂ of the time I felt weak and listless.

The biggest temptation for me was to “cheat” and snack on something. Take a shortcut, nobody would know.

JesusÂ had a much more intense set of temptations to fight off. Â ButÂ he faced the same ones we face, and much more.

“No temptations have come upon you except what is common to man.” 1 Corinthians 10:13

Satan’s plan of attack more seduction than coercion.Â “Take a shortcut, you can justify it, no one will know.”

He challenged the now-publicly-proclaimed identity of Jesus, subtly trying to undermine his self esteem and get his head spinning with doubt.

Our enemy, the devil, is always trying to attack two things: our identity and our destiny.

“… turn the stones to bread”

Jesus had not eaten anything in 40 days. He wasÂ physically weak. His will power wasÂ low. He was HUNGRY!

The devil’s temptation was essentiallyÂ  for the Son of God to abuse his power and meet his legitimate need in an illegitimate way.

“It is written … Man does not live by bread alone.”

The devil upped his game. “Worship me and you can have all the bright shiny stuff there is …”

Satan’s “win” is to direct worship to anything other than the only One worthy of worship.

Jesus counter punched.Â Â â€œIt is written: â€˜Worship the Lord your God and serve him only.”

FinallyÂ the devil presented a distortion of scripture to seduce ChristÂ with a big shortcut. “Jump off the cliff.” No cross, no shame, no suffering, no death. Do a magic trick instead.

If you’re satan, a dude with a totally anti-God agenda, the way he was misinterpreting scripture sorta made sense.

But Jesus responded with a better theology.

“The word says ‘Do not put the Lord your God to the test.'”

The devil had taken his three best shots and struck out. Then he left Jesus. The pressure was off, until next time.

The practical application is Jesus modeled for us how to fight off the most severe temptation when you are at your weakest.

The key is not will power, it’s wordÂ power.

For the word of God is living and active and sharper than any two-edged sword, Hebrews 4:12

Take the helmet of salvation and the sword of the Spirit, which is the word of God. Ephesians 6:17

Submit yourselves, then, to God. Resist the devil, and he will flee from you. James 4:7

When you find yourself in times ofÂ temptation, especially when it’s intense, fight back – repeatedly, frequently and primarily – with the very word of God. 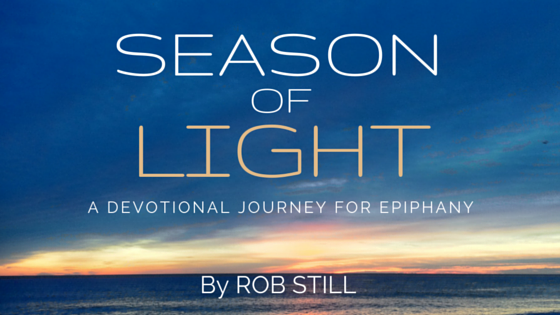 About Season Of Light

I am writing a devotional series called â€œSeason of Lightâ€ (#SeasonOfLife) during the beginning of 2016, focusing on the 40 day season of Epiphany (from January 6 â€“ February 10). Weâ€™ll explore the major biblical themes ofÂ the beginning of Jesus ministry, and Iâ€™ll comment as the Holy Spirit inspires. This is for the purpose of growing in our relationship with the Lord. My desire â€“ my hope and prayer for you â€“ is that yourÂ heart may expand and your spirit grow brighter as we seek to be filled with the knowledge and presence of God. So, I invite you to join me on the â€œSeason of Lightâ€ journey!

Our church is also on a reading plan of four chapters per day, starting in the New Testament. Today isÂ Luke 1-4.Â