On a national level, the Sandy Hook massacre is the most profoundÂ tragedy I can recall since 911. I felt some solace in the words of this song. I hope others do too.

Like millions of Americans, Friday night I was glued to the TV watching the news updates on CNN. Local townsfolk were packing nearby churches for prayer, just like 911.

At the same time, I was doing final prep for Sunday’s worship music, which was full of celebratory Christmas songs.

But now,Â  this isÂ a time to be interrupted, to mourn, to lament.

Where does “Christmas” fit in with such sorrow? What song or other expression could possibly give voice to both realities?

I remembered Christmas at my in-laws in rural Delaware, Â listening to Johnny Cash sing:

And in despair I bowed my head;
“There is no peace on earth,” I said;

“For hate is strong,
And mocks the song

Of peace on earth, good-will to men!”

This juxtaposition inspired my version of “I Heard the Bells on Christmas Day.” I quickly recorded it on my IPhone as ABC’s Nightline recapped the story.

“Christmas Bells” was a poem written by Henry David Longsworth in 1863. He was feeling the despair of losing both his wife and son during America’s Civil War. Words penned long ago felt very relevant to me.

There really is no explanation for the unexplainable.

All over social media, people are sharing their reactions to the tragedy. These are the emotions that make us human and connect us with one another.

I’m a worship guy. This song is my expression.

If you found this song helpful, please feel free to share it socially on Facebook, Twitter, whatever. I have other songs that process pain, loss, and conflictÂ – grouped together as “For Those Who Mourn” , Â including the videoÂ “No Easy Answers”

Our prayers are with the people of Sandy Hook and Newtown, Connecticut.Â

The peace ofÂ theÂ Lord be with you. 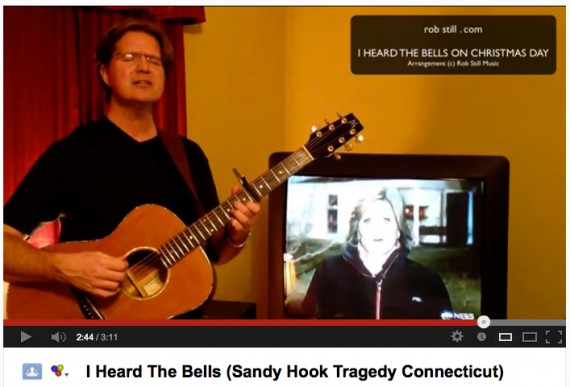