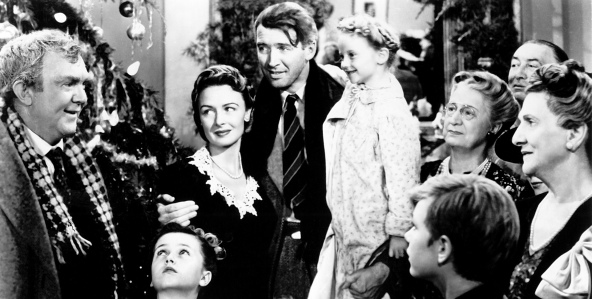 " You see, George, you really had a wonderful life. Don't you see what a mistake it would be to throw it away?"

This Christmas night we continued the family tradition of watching “It’s a Wonderful Life.”Â Â  We’ve been doing this for 20 plus years and yes, I’ve been the instigator. Call me sentimental, cornball, whatever. To the annoyance of some family members, I can quote most of the lines and yes, I still cry at the end.

It’s one of the most popular and inspiring movies of all time. “The story of George Bailey, for the one or two people who still haven’t seen the classic Frank Capra film,Â  is a man driven to the brink of suicide when he comes to believe his life never really mattered.”

It’s a message of hope. That maybe we can make a difference as long as we never give up.

What were the character traits that made George Baily’s life “wonderful”?

1) Selflessness. George lived the second commandment “Love your neighbor as yourself.” He lived sacrificially by the principle of putting others first. He was a giver. His life was about contribution.

2) Delayed gratification. George and Mary had vision for the long term. Whether it was saving the Building & Loan, or fixing up the old house that became their home, or building the Baily Park subdivision. They understood the principle of investing in long term gain by enduring short term pain. They sowed into something bigger than immediate gratification.

3) Appreciation. Yes, it took angelic intervention to break George out of his despair, but his conclusion was to appreciate the life he had been given. As Joni Mitchel sang, “you don’t know what you’ve got til it’s gone.” In fact, he was overjoyed to have it all back, problems and all. “I’ll bet it’s a warrant for my arrest. Isn’t it wonderful? I’m going to jail !”

There’s a blessing to living for the benefit of others. Friends, and many of them.

And conversely, not everybody is guaranteed to have “a wonderful life”; if you’re only living for yourself, you can expect to reap what you sow. Like Mr Potter, you’ll not have many friends.

“No man is a failure who has friends”

The hope is that your life, my life, can make an impact, no matter how small or seemingly insignificant our contribution.

You never know the difference you can make.

If haven’t seen the movie or don’t know it that well, you can check out this full length version here: