It’s an exciting event with an exhilarating atmosphere. Although my time was among the slowest, for me, the accomplishment was a personal best.

This is obvious, but running a full marathon is more than twice as hard as finishing a half-marathon.

It was intense, even at a moderate pace with plenty of walking.

You don’t just wake up one day and go run one of these things on a lark. It took some planning and lots of prep. For me, that was a few years. Here’s that story and some lessons learned.

My interest in the marathon was piqued first through being on the worship team at Belmont Church, on 16th & Grand, Music Row. This year’s team was led by my pals Caryl Parker and Rob Frazier.

For many years, BelmontÂ  has been on the marathon route (9 mile mark), and we provided a worship team to cheer on the runners.Â I was leading the team as Pastor of Worship & ArtsÂ back in 2007.

From the perspective of our stage, the marathon race was an amazing sight to behold.

First you see the flashing blue lights of the police cars, motorcycles and other vehicles.

Then some bikers followed the wheelchairs athletes zooming by.

A little bit later you see one, two or three runners leading the pack, followed by a small group of the elite runners, you know, the guys from Kenya or Ethiopia and they are fast, really trucking. Next there’s a small bunch and some scattered runners a little bit behind them, must be the high level major college competitive runners.

Then there’s a little gap. followed by many more serious runners which builds to hundreds of runners. More and more runners pass by until what started as a stream grows into a sea of humanity and colors and energy soaring past you.

I was watching this human tidal wave run past me, I started seeing not just jocks and fitness freaks, I saw regular people, and old people and little old ladies, and very large people. Then it looked like a running street party with hula hoops, jugglers,Â  tutu’s and costumes. That’s when it hit me.

Then I saw older overweight people walking, strolling, laughing and “running”, and I thought.

“Heck, I could that”

This years praise team led by Caryl Parker and Rob Frazer. They let me sit in for my song “A New Anointing”Â  Thanks!

From Watching to Running

And so a year later in 2008, I ran my first half-marathon, 13.1 miles. Oh man , I was so stiff and sore afterwards! Everything hurt for days.

The following year, I decided to go for the whole enchiladaÂ  and signed up for the full marathon in 2009. Got the T-shirt to prove it. However, as we were running , a big storm came up and the officials closed the course, re-directing the slower runners to the half-marathon finish.

Bummer. All my “training” was for naught.

The next year 2010, I injured my knee playing tennis, so I didn’t run. But “Finish Full Marathon” was still firmly entrenched on my bucket list.

I have this bad habit of wanting to finish a project no matter how long it takes. Case in point, the album “What Words Can’t Say” took almost 10 years to complete. But that’s another story for another day. Back to this bunny trail.

So in December of 2012 I made the decision, I was going to try the full marathon again.

I emotionally connected to this vision and made it a priority.

I took my “training” seriously, ran 3-5 times per week and worked up to long training runs of 13-21 miles. I took a month off from tennis to save my knees. I felt as well prepared as I could be for the big day.

Some strategy and lessons learned that could be applied to any context.

1. Rest the body and don’t over train. I knew from experience that you can’t “catch-up” by trying harder. You have to give the body time to recover and rebuild strength.

2. Cross Train on non-running days I would still work out, albeit lightly.

3. Stretch & Warm-Up this is so important, the older you get. I started thinking of my body as an antique car, baby it along and take it for a spin on nice days. I also found this lotion called Blue Emu that helped alleviate leg soreness.

4. Go slow & easy on the runs. I was in no hurry and I found it took about a mile to get in a rhythm.

5. Mix in sprints during the training runs. This really helps strengthen the legs and ups your metabolism. This was very helpful.

7. Food here I started being very intentional about having a breakfast with protein and carbs. My standard breakfast was an egg, kidney beans and spinach. Add some 6 pepper seasoning and yum! 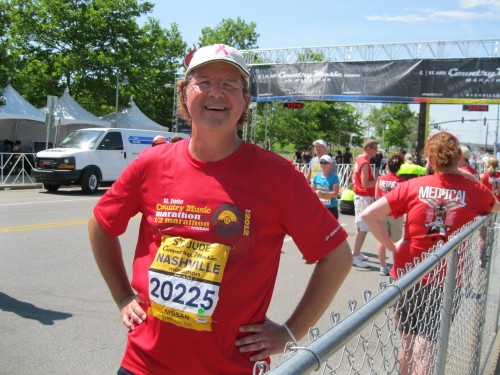 What do you call the last person to finish a marathon? “A Marathoner!” (No, I wasn’t last, but close to it)

After some recoup, I’m back to running and tennis. I also plan to bike more to put less wear & tear on the knees.

A great benefit of this marathon project was the positive psychological feeling from accomplishing a very specific measurable goal with a non-negotiable deadline requiring long term planning and commitment.Â  The improvement in fitness is also super helpful in every area of life and work.

I’ll definitely run the half-marathon next year, Lord willing. It’s a much more enjoyable experience, plus the Country Music Marathon is just a great, fun event to participate in.

If I can’t run,Â  it would be fun to host a band stage. I’d do songs like “Take It Easy” and “Running on Empty”, and “Don’t Stop”, make a medley. Heck do every road worthy traveling song out there. Maybe somebody will run with that idea. Any takers?