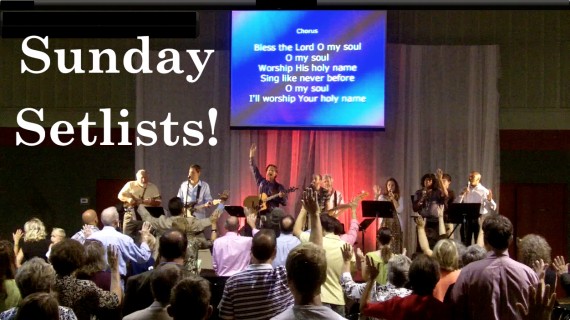 Today we ended up introducing a lot more new material than usual. There were multiple reasons, but it all worked out pretty well. I’ll share some crib notes at the end.

One governing principle I use in planning is this:

Make it easy for the average person to worship.

Usually that would mean using mostly familiar songs. In a break from thatÂ  strategy we employed songs that have not been in heavy rotation, combined with some “new” songs. (New for this congregation anyway, we’ve only had this service going for 11 months.)

For example, we’ve only doneÂ  Hosanna once (Paul Baloche / Brenton Brown), back on Palm Sunday.Â  We’ve only done Beautiful One once also, and that was many, many months ago. I think the youth introduced 10,000 Reasons a while back, but it was new to our team.

So today there was a lot of “not so familiar” music.

Sometimes you just got mix things up to keep it fresh and not too predictable. People need variety, too. Yes, there’s more to it than that, but that’s another post.

There’s an art and a strategy to song selection and developing a congregation’s repertoire.

Regarding new or unfamiliar songs, I think if a song is simple to learn and has a lot popularity through media, then it’s logical that it would have a lower learning curve.Â  So if the song’s idea is on target, I would run with it.Â  Just make sure you apply some wisdom for your context.

This week we didn’t start with an intro video.Â  Instead, we taught the chorus to “10,000 Reasons” as a prelude before the service began. So when it came up during the worship set, almost everybody (but the last minute arrivals) knew it.

A good reason to be early at our church. 🙂

We sang “Lord Have Mercy” as our prayer of response to the message with just the chorus and 3rd verse. Then combined that with another new song, Love Never Fails You, a beautiful song by Brandon Heath. The lyric was spot on with the theme of our series “Love Notes” based on 1 Corinthians 13. It was more of a music “special”, but we’ll do that every once in a while. It was a really nice moment.

We ended with another song we’ve never done yet, but is quite well known, “I Could Sing Of Your Love Forever”.

Response and participation was really good. We got some great feedback. It was a beautiful service.

See these articles for more thoughts on song planning:

This post is part of theÂ Worship Community Sunday Setlists, see what others are doing here: http://www.theworshipcommunity.com/sunday-setlists-216/

By the way, have you heard about my next missions trip to Sri Lanka? Read about it here.Â