Things are rockin as I write this at the School of Worship in Romania! Â I’m working on a new post on life here.Â In the meantime, here’s a video and story from SOZO Festival of moi singing with the SOZO Gospel Choir.

SOZOFestival (July 26-29) began each day with worship, then 6 different seminar topics. It continued into the evening with 3 unique music outreaches until late at night. The whole thing was a huge rush. More detail about all that later.

Darijo Sehic, a great Serbian worship leader and songwriter was the SOZO event coordinator. He organized the nightly outreach events to this formerly communist and mostly atheist city.Â We held perhaps the first ever gospel music concerts at a popular recreation area on the Danube River by the Freedom Bridge, one of the bridges bombed by NATO in 1999.

Christian musicians, bands and worship teams Â played on the main stage during the evening outreaches. There was a whole lot of worship as witness going on.

Darijo was the visionary behind the SOZO Gospel choir, which comprised folks from Serbia and the nations represented at SOZO, including, the US and Romanian teams. 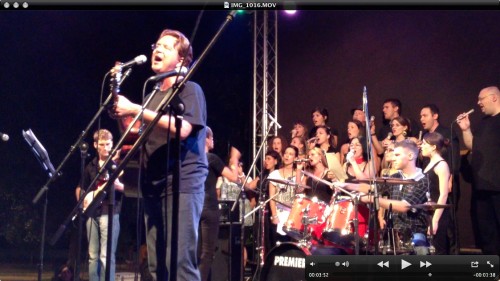 I was invited to be a guest vocalist on the Third Day song “King Of Glory”. I was unfamiliar with the song, but man the lyrics are fantastic! So I did some serious woodshedding to learn it.

The schedule was so tight, we only had 10 minutes with the band at the sound check. I never played the song the whole way through with them. Sheesh, like walking a tight-rope, no margin for error. Â In this video you may notice we got a little lost but I guess we pulled it off.

I sat in with the choir for their other songs and had a ball singing basso profundo.

NOTE: This post is part of my on-goingÂ Mission Trip 2012Â series.

Â Over to you. Any comments? Go for it. Thanks!