To Obey Is Better Than Sacrifice 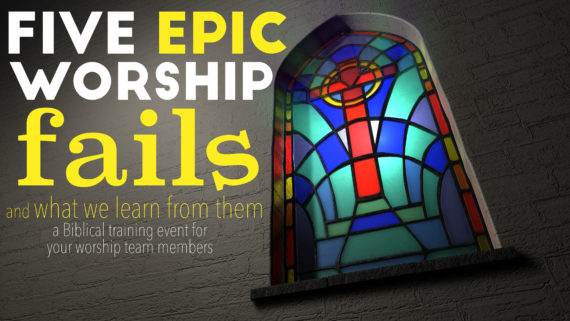 Final installment! In this series we’ve been looking at Five Epic Worship Fails from scripture, Â what we can learn from them, and how we can apply their lessons in our lives and ministry. Make sure you read the Introduction first!

In the session were going to be looking at two episodes from the life of Saul in the Old Testament.

Background of the story.Â  Saul is the first King of Israel. He was anointed, and he has some early victories in his life and reign. But he has a bit of an inferiority complex and it caught up with him. Ultimately, His character couldÂ not sustain this calling.

Let’s look at the first story.Â

Episode 1: Fear and Exceeding Your AuthorityÂ

Saul was about 30 years old when he became king, and after he ruled for at least two years, he organized an army.

5 Now the Philistines had gathered their forces: 30,000 chariots, 6,000 horsemen, and so many foot soldiers they were like grains of sand on the beachâ€¦Â 1 Samuel 13:5

This wasÂ aÂ massive invasion force and itÂ was a dreadful sight to behold.

6 When the people of Israel saw they were in danger, for their troops were seriously outnumbered, they hid in caves and in holes, among the rocks, tombs, and cisterns.Â

Saul remained at Gilgal, and all the troops with him were quaking with fear.

8 Saul waited for Samuel for seven days, the amount of time he had been told by Samuel to wait. But the prophet did not come to Gilgal, and the people began to slip away. A few more days and Saul would have no army left, so he decided to take matters into his own hands.

Saul: 9 Bring me the animals for burnt offerings and the offerings of peace for the Lord. 10 Although Saul was not a priest, he offered the burnt offering himself without waiting for Samuel.

This was a big no no.

Immediately after Saul finished the offering, when the aroma of the sacrifice lingered over the land, Samuel arrived, and Saul went out to greet him and to pay his respects. But Samuel knew Saul had overstepped his bounds.

Samuel: 11 What have you done?

Saul: The people were deserting me! You didnâ€™t come when you promised, and the Philistines were gathering for war at Michmash. 12 I thought, â€œThe Philistines are going to attack me here in Gilgal, and I havenâ€™t even asked the Eternal One to favor us.â€ So I took matters into my own handsâ€”I didnâ€™t want toâ€”but I offered the burnt offering myself.

Samuel: 13 That was a foolish thing, Saul. You have not kept the commandment that the Eternal, your True God, gave to you. He was willing to establish your kingdom over Israel for all time, 14 but now your kingdom, your dynasty, will not last. He has found a man who seeks His will and has appointed him king over all the people instead of you because you have not kept to what the Eternal One commanded. But now your kingdom will not endure; the Lord has sought out a man after his own heart and appointed him ruler of his people, because you have not kept the Lordâ€™s command.â€

So we see that Saul, full of fear, acts outside of his authority and takes matters into his own hands.

Background: Samuel has a message from the Lord that sends Saul on a mission to battle against the Amalekites. He is instructed to â€œtotally destroyâ€ them and not spare any living creature, man nor beast. (v.3)

Saul wins, but instead of destroying everyone and everything, â€œspared Agag their king, and the best of the sheep, cattle and lambs – everything that was good. (v.9)

That night, the Lord tells Samuel â€œI am grieved that I have made Saul king, because he has turned from me and will not carry out my instructions.â€ (v.10)

Here’s the rest of their conversation fromÂ Samuel 15:16-23.

16. â€œEnoughâ€ Samuel said to Saul, â€œlet me tell you what the Lord said to me last nightâ€
â€œTell meâ€ Saul replied

17 Samuel said, â€œAlthough you were once small in your own eyes, did you not become the head of the tribes of Israel? The Lord anointed you king over Israel. 18 And he sent you on a mission, saying, â€˜Go and completely destroy those wicked people, the Amalekites; wage war against them until you have wiped them out.â€™ 19 Why did you not obey the Lord? Why did you pounce on the plunder and do evil in the eyes of the Lord?â€

20 â€œBut I did obey the Lord,â€ Saul said. â€œI went on the mission the Lord assigned me. I completely destroyed the Amalekites and brought back Agag their king. 21 The soldiers took sheep and cattle from the plunder, the best of what was devoted to God, in order to sacrifice them to the Lord your God at Gilgal.â€

â€œDoes the Lord delight in burnt offerings and sacrifices
as much as in obeying the Lord?
To obey is better than sacrifice,
and to heed is better than the fat of rams.
23 For rebellion is like the sin of divination,
and arrogance like the evil of idolatry.
Because you have rejected the word of the Lord,
he has rejected you as king.â€

This is a really sad story I think in a lot of ways. There’s more detail in the complete text, I would encourage you to go read Â 1st Samuel chapter 13 through 15 sometime because there’s a lot of insight about character.

Saul failed when he faced tests of character.

First, he shaded the truth. He distorted the facts and told what was only partially true. He was a spin meister.

Second, he made excuses and rationalized his disobedience.

Third, he was afraid. He was full of the fear of men.Â He played to the approval of the crowd,which is a type of â€œfear of man.â€

Saul did not wait on the Lord, he was not patient, he was not trusting God. He did not obey direct orders, he cracked under pressure and took matters into his own hands, making mattersÂ worse.

As a result, he lost the favor of God, and eventually lost it all.

What couldÂ this passage mean to you today in yourÂ context? Here’s a few ideas.

1. Avoid the fear of man, be a God pleaser first, not a people pleaser. Don’t play for the approval of the crowd. That’s not what worship ministry is about.

Fear of man will prove to be a snare,
but whoever trusts in the Lord is kept safe. (NIV)

The fear of human opinion disables;
trusting in God protects you from that. (MSG)

2. Be patient and wait on the Lord, trust His timing, even when He seems to tarry.

3. Tell the truth even when it hurts.

4. Donâ€™t make excuses! Take 100% responsibility for everything you do, especially in ministry.

5. Be determined to be one who obeys.

6. Aspire and strive to be a man or woman â€œafter his own heartâ€.

How are we to respond to the revelation of Godâ€™s word once we engage with it? Here are nine possible responses that we can apply and act upon.

1. Is there a Sin to avoid, forsake or confess?
2. Is there a Promise to believe or condition to meet in order to receive the promise?
3.Is there an Attitude to change or guard against or an Action I need to take?
4. Is there a Command to keep?
5. Is there an Example to follow?
6. Is there a Prayer to pray or a Priority to change?
7. Is there an Error to avoid?
8. Is there a Truth to memorize and meditate upon ?
9. Is there Something to thank or praise God for?

â€œFather, help us serve You with integrity. Help us to be men and women after your own heart. Form godly character in us. Help us to be pleasers of God first. Help us not make excuses when we fail, no matter how epic it is. Thank you for your grace and mercy. We ask these things through Jesus Christ, our Lord and Savior. Amen. â€œ

Well this concludes this series, Five Epic Worship Fails. Thank you so much for reading! I hope it’s been helpful to you. God bless you.

The Lord be with you!

[Note: This is a 6 part blog series based on a webinar workshop I taughtÂ for WorshipTeamCoach.com entitled â€œFive Epic Worship Fails and we can learn from them.â€ It is intended to be used as a biblical training resource for your worship team. These are offered as a series of short videos (5 to 10 minutes each) with a study guide and questions you can useÂ to facilitateÂ conversations for growth. You can find a replay of the original webinar and a link the resource here:Â Five Epic Worship Fails Replay. ]Â