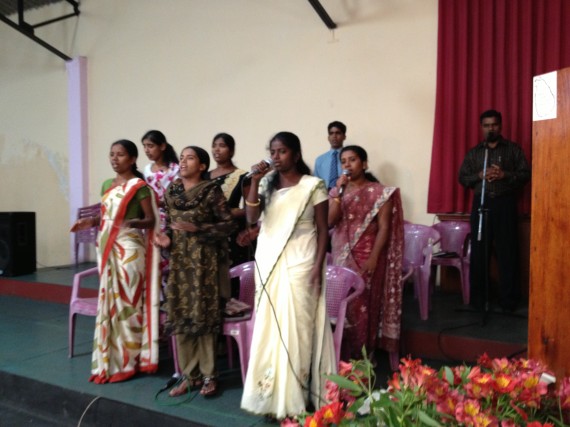 I was pretty much out of pocket for reporting worship sets in November so here’s a one shot catch-up. I was in three different churches in two different nations.

This was a wonderful communion service and send off. Immediately afterwards I flew out for my Sri Lanka missions trip and wrote these words somewhere over the Atlantic ocean.

“It was a busy day! We had a guest speaker, a missionary family from the Ukraine that runs English camps. Then we observed All Saints Day, and Communion.”

Poem “Death Is JustÂ  Word” Video by Madison Davis
For this video I composed a simple postscore to accompany the taped reading. I played it live on keyboard during the service.

All Saints Observance
I improvised a piano/bell theme as the names were read with a photo, and candles were lit.

Love Will Hold Us Together

This was an exciting day. After ministering all week at our worship conference, then a youth conference on Saturday night, we journeyed early in the morning through the …. ahem ….Â adventurous mountain roads from Hatton to Nuwara Eliya.

It was beautiful and nerve wracking.Â  Here’s a pic of one waterfall from the drive.

When we arrived , the first of three services had already begun. We were ushered immediately to the front of the “English” service and shared two songs. I can’t remember the name of the first, the second was Mighty To Save.

Elliott played the church keyboard while I played guitar and Anna sang. The keys were apparently not tuned to A440, so my guitar sounded ever so annoyingly out of tune. I had to stop playing and just sang harmony.

Then Elliot and I were escorted to the second service, also already in progress in Sinhalese.

We sang Mighty to Save again. Then I preached to the Sinhalese congregation about Putting The First Commandment in First Place.

I concluded my message with a prayer and taught the chorus to A New Anointing / This is The Day. After a couple of repeats, the keyboard player jumped in playing the chord progression and the drum beat spot on. I was impressed!

The third and final service was in Tamil, Elliot preached at that one.

It was beautiful listening to our brothers and sisters singing their own songs in their heart language, whether it was Sinhalese or Tamil. Most songs I did not recognize, however there were one or two older songs I knew. They sang a beautiful version of Michael W. Smith’s Agnus Dei.

[Trip down memory lane] I remember when MichaelÂ  introduced Agnus Dei at Belmont Church way back in the day. I remember thinking, what time signature is that? It was such an unusual rhythm.

Then I wrote down the lyrics on my bulletin from the overhead transparencies. Went home and figured out how to play it for our junior high worship that night.

Here I AmÂ  To Worship

The Lords Prayer (Malotte) with Jenny Slate Lee. That was special!

It was a beautiful day of worship.

Your Grace Is Enough

Jesus Be The Centre

This post is part of theÂ Worship Community Sunday Setlists, see what others are doing here: http://www.theworshipcommunity.com/sunday-setlists-227/