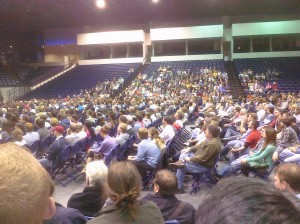 I was at the Rob Bell lecture at Belmont University April 6. This post is not about the controversy surrounding the book “Love Wins”. I have not read the book and do not have an opinion to offer yet. However, here are two quotes from his talk. I’d like to get your opinion on this question – Is Rob Bell proclaiming the gospel?

[Some see God as an] angry mean uncle, kind of like a police officer – but with a faster car. We have these conceptions of what God is like: Demanding… whatever you are doing, just do more of it, and just look busy, because God is a slave driver.

And what Jesus does is, [he] comes, and at the most deepest level of the soul, or you could even say the psyche,Â  he calls into question your conception of the divine. Because how you understand God deeply shapes how you live and move.

So what he does is, he comes among us and he calls us to repent of all of the ways, all of the ways of thinking and all of the modes of being in which we are actually following a mean, nasty, angry God who is not good, who is not loving, who is not on our side, and He says repent from that, turn from that, confess that sin and be transformed so that you might see truly see who this God is, so that then you may extend this God saving love to others.

This, the first people who heard that said – is good news.

So at the center of this Christian story is the insistence that God has not abandoned the world but in this Jesus comes among us, looking … a bit like us. Divine …Â  human. And He comes among us and he offers us this love. He is willing to die for it.

Now, He does not come along and say

“Repent cause I’ve got some great doctrine for you. (laughter )

He does not say

“Wake up cause I’m bringing the dogma and it ran over the karma.” (laughter)

He comes and he says … I am the living water.

He comes, and he does not come for those who want to analyze and systematize water.

He comes and it can all seem like a metaphor and it all seems vague, and it can seem like ‘where does he really stand on the whole water thing?’

Unless of course you’re thirsty – and then you get the water thing.

So – What do you think? Does this sound like the gospel? I’d l love to see your comments.