Why Worship and Missions? 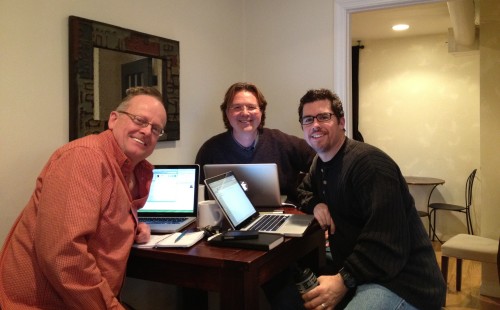 Yesterday I met with my good friend Randall Morgan, Director of the SOZO Festival for coffee at the Perch. [Sidebar: We also randomly we bumped into Brian Petak, a great worship leader, songwriter and SOZO alumni who is now Global Outreach Pastor at Fellowship Bible Church. We grabbed this quick pic.]

Randall and I were discussing plans and strategy for SOZO 2012. I am so excited this summer it will be in Novi Sad, Serbia! There will be an announcement with more details released soon.

SOZO changed my life. For 12 consecutive years I’ve been involved in missions work in eastern Europe.

I’m going write a series of posts to share my perspectives on missions.

Today’s thought is courtesy of John Piper. He answers the question: Why missions?

Missions exists because worship does not.

Missions is not the ultimate goal of the church. Worship is. Mission exists because worship doesnâ€™t. Worship is ultimate, not missions, because God is ultimate, not man. When this age is over, and the countless millions of the redeemed fall on their faces before the throne of God, missions will be no more. It is a temporary necessity. But worship abides forever. Worship, therefore, is the fuel and goal of missions. Itâ€™s the goal of missions because in missions we simply aim to bring the nations into the white hot enjoyment of Godâ€™s glory. The goal of missions is the gladness of the peoples in the greatness of God. (Let the Nations Be Glad!: The Supremacy of God in Missions 2004, p.17).

This idea has been a catalyst for my passion to disciple young worshipers all over the world.

My mission is to help ‘the least of these’ find freedom and joy in the enjoyment of God’s love. To equip and release them in expressing their hearts to God in spirit and truth.

More on ‘missions and worship’ in the next series post…

Question: Have you been involved in missions? Interested in going to eastern Europe this summer?