Teenagers, Worship and the Smartest Generation

Recently I had the privilege of speaking with about 400 teenagers at the chapel for Salisbury Christian School. Some of that message is relevant for this blog.

It’s quite possible that today’s young people are the Smartest Generation ever. I believe they are. But whether they turn out to be the Greatest Generation is yet to be determined.

It depends on the heart. Our hearts determine the direction of our lives (Proverbs 4:23). So the journey to greatness begins inside. Jesus gives an evaluation of the heart condition of his generation that we should soberly consider.

“These people honor me with their lips, but their hearts are far from me. They worship me in vain; their teachings are but rules taught by men”. Mark 7:6

What is the state of your heart?

Wholeheartedness is pleasing to God (Mark 12:30). It’s a two-sided coin with a double benefit. Not only is God is looking for wholeheartedness, but we want it for our own lives, too.Â  Deep inside we long to be wholehearted, to live with passion and purpose towards a meaningful destiny, to to be “All In”.Â  It’s what God desires of us, and it’s what we want for ourselves.

When David was a teenager,Â  the potential of greatness was within him, just like today’s generation. At the same time, he faced rejection, being misunderstood, and outright danger.

Yet David was a success. He took out a lion, a bear and a trash talking giant named Goliath.Â  He was a hot songwriter and a bad-to-the-bone warrior. Scripture affirms David fulfilled all of God’s purposes for his generation (Acts 13). He is commended as an example for us to follow. He is known as a man after God’s own heart. In fact, except for Jesus, David is referenced throughout scripture more than any other biblical character.

David had something better than self-confidence. He had God-confidence.

David had confidence in God because he had a great relationship with God. He invested time with God. David’s heart grew to where he had an unshakable faith that God deeply, affectionately loved him. He knew that God had his back, no matter what.

The Lord was with David. And just like God’s favor was on David’s life, it can be on our lives, too.Â  The question is, what was it about David that would cause God to say “I like this guy, I can do something with him.”

David enjoyed being with God.

David was a worshiper. He had a lifestyle of personal worship, of drawing close to God. He practiced the presence of God. And what David did, we can do.

This summer don’t be bored. Practice the presence of God. See him in the heavens and nature. Express yourself with music. Write a song. Just be with God. It’s so worth it. The more we get to know Him, the more we enjoy being with him. 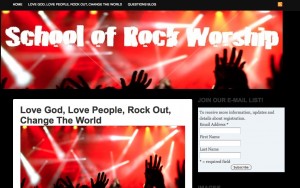 This summer will be an awesome opportunity for teens to grow their heart and musical skills at the School of Rock Worship, June 27 – July 1. A rock band day camp for students ages 11-17 to have fun learning play music, rock out and change the world. Check out the website for more details. [ Day camp only offered in the Salisbury, Maryland area]

The purpose of this blog is to encourage wholehearted worship worldwide.