Why Do Europeans Have A Low View of The Church ? 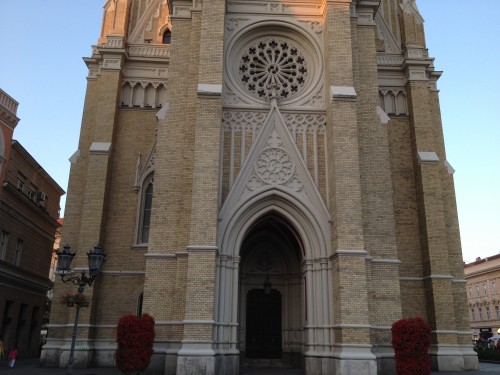 A cathedral in Europe.

NOTE: This post is part of my on-going Mission Trip 2012 series.

Iâ€™m flying somewhere over the Atlantic as I write this, itâ€™s Sunday July 22.

So Iâ€™m sting on the plane next to a European young adult and we get into a conversation about church, religion, and spirituality.

She has a secure good job in the public sector with great benefits.Â  But in her country a tax is imposed by the state that goes to the church. If you want to be baptized, married and buried, you have to be â€œin the churchâ€ and continue paying the tax. Itâ€™s based on a percentage of her income.

As a matter of conscience she decided â€“ â€œno, I donâ€™t agreeâ€ and she began a lengthy process to formally withdraw from the church so she would not have to pay the tax anymore.Â  A year and a half latter after jumping through many beaurocratic hoops, she was certified and exempt from paying the church tax.

She represents a number of Europeans who have a low view of the church.

She explains to me, if you find people in Europe who are not friendly to the church, this is one reason why.

The mixture of church and state has been a really bad idea since Constantine, when the Roman EmpireÂ  became the Holy Roman Empire. Conversion by coercion is not doing Godâ€™s work Godâ€™s way.

In the bible, people give to God out of their free will.

Since the beginning of the biblical story, the God who is love wanted relationship and created us with his DNA planted deep in our inner being. And we are free to choose.

I tell her, God wants to have a relationship with each of us and He is pursuing you. If you have an open mind and a seeking heart, he will reveal himself to you.

Heâ€™ll seat you on planes next to guys that randomly lead to this kind of conversation.

I tell her about God’s story and that everybody lives out of some defining narrative. Everybody believes something by faith. Even the atheist has faith that he is right.

She asks, “Can you tell me, how does God allow terrible things to happen? Does that cause you to lose your faith?”

And I tell her that Iâ€™ve had a lot of bad things happen in my life, and at the end of the day, you have a choice to believe and have hope that God is who He says He is â€“ good, loving, forgiving, faithful kind.

You can choose despair and hopelessness.Â  You have free will. Choosing despair though, just doesn’t work.

We talk about the idiot who massacred those people at the Batman movie. That’s a human abusing his free will.

Don’t blame God for that one.

I bring up natural disasters like the earthquakes and tsunamis. Why? To me, itâ€™s a mystery, I donâ€™t know why.

I think you have to begin with a quest for truth.

I tell her about about his life, death & resurrection.

We continued a friendly conversation and as the flight ended, I told her I would pray for her andÂ  about my song No Easy Answers.

Then I suggested she get a translation of the bible that was easy to read, not something from the 1600’s. Read Genesis, then Mark. “You can read Mark in a couple of hours” I tell her.

May the Holy Spirit cause those seeds to bear good fruit.

That was the first 7 hours of my trip.

I love having these kinds of natural conversations and questions, and telling people about Jesus. He is completely relevant in today’s world.

So I arrived in Serbia with no major problems, nothing worth writing about anyway. Team members arrived from England, Holland and the USA. There were many of joyful re-unions and new relationships beginning with SOZO friends old and new.

Those of us from the States, including yours truly, were quite exhausted, jet lagged and sleep deprived. So off to bed I go, it’s 12:30 am Tuesday here, 5:30 Nashville time.

Thanks for praying and following along.

PS. I’m finding that Facebook is easier for posting pictures and more real-time updates (when we have internet), so friend my Rob Still Ministries Facebook page and follow along.